That's my reaction to the news today that late-term abortionist Dr. George Tiller was murdered this morning while serving as an usher at his church.

I am unapologetically pro-life. What Dr. Tiller did at his clinic was kill pre-born human beings. But as much as I oppose Tiller, he did not deserve this fate, nor his family the profound grieve they now feel.

Whoever committed this crime is no friend of the pro-life movement. Furthermore, they heinously failed to live out Jesus' command to "love your enemies and pray for them" (Matthew 5:44).

Tiller lived by the sword. Sadly, he died by it too.
Posted by Living the Biblios at 6:04 PM No comments:

God's Power in a World of Evil 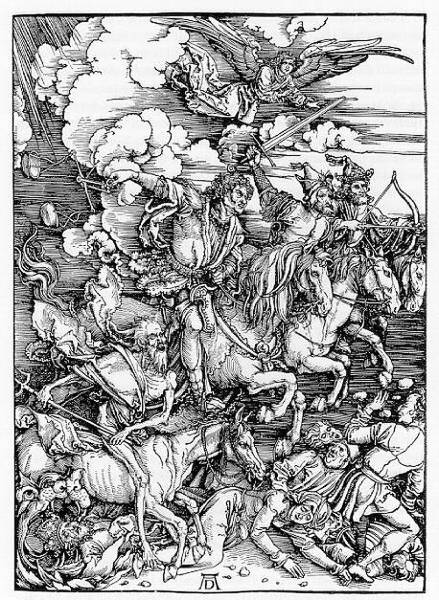 Reflecting on Revelation 6, Bruce Metzger in his fine, concise book on Revelation, "Breaking the Code," reminds us that when the affairs of the world seem out of control, God continues to hold everything in His hands:

One of the features that distinguishes the book of Revelation from other books of the New Testament is the author's attempt to show how power fits into the divine scheme of things. John begins with the belief that all power comes from God. God is the absolute ruler of the world. But because God gave humankind free will, there is always the possibility tha we might misuse the portion of power entrusted to us. When this happens, however, it does not mean tha God is helpless and frustrated. The world is still God's world, and is still ruled in accordance with the eternal laws of right and wrong. The way that God's power is manifested in the world is that the misuse of power brings on suffering and disaster. Wars, starvation, devastation--these are the means by which it is made plain that power abused is still under God's control. These are the "judgments" of God being worked out on the plane of history.

Posted by Living the Biblios at 8:37 AM No comments:

The New Times writes about me and thousands of people who pay off their credit cards every month-- the credit card companies aren't happy and they're coming after us:

Banks are expected to look at reviving annual fees, curtailing cash-back and other rewards programs and charging interest immediately on a purchase instead of allowing a grace period of weeks, according to bank officials and trade groups.

According to David Robertson, who tracks the credit card industry, folks like me who pay off the card each month--about 50 million people or a 1/3 of all credit card holders, have been "making out like a bandit."

Bandit? Pardon me, but I think these card companies still profit by the transaction fees they charge merchants. And the rebates, points, etc.? While something is given back to me, it certainly isn't much. Chump change actually. And they should know.

Personal money expert Dave Ramsey says that even if you pay off the amount every month, people who use credit cards spend more than those who deal just with cash.

So if the credit card companies start charging me to use their card, I'll seriously consider cutting it up.
Posted by Living the Biblios at 4:31 AM No comments:

What Makes Dan Brown So Popular

Ross Douthat writes an interesting op-ed piece for the New York Times that explains why fiction writer Dan Brown is so popular:

In the Brownian worldview, all religions — even Roman Catholicism — have the potential to be wonderful, so long as we can get over the idea that any one of them might be particularly true. It’s a message perfectly tailored for 21st-century America, where the most important religious trend is neither swelling unbelief nor rising fundamentalism, but the emergence of a generalized “religiousness” detached from the claims of any specific faith tradition...

Jesus ministered in a time when plenty of options for religious worship existed--like Roman Emperor worship and gods like Zeus and Artemis. Jesus even visited one of the more popular sites of pagan worship--Caesarea Philippi, place of Panias worship. But it was there that Jesus commended Peter for his insight that Jesus was Messiah and then Jesus promised the "gates of hell" (read--other spiritual forces and alternatives) would not overcome the kingdom his represents.

Jesus never represented himself as "one more god." He made exclusive claims about himself that has consequences for our own lives. John 14:6 is where Jesus says it distinctly and clearly: "No one comes to the Father, but through me."

Douthat goes on to say though that Brown's portrayal of Jesus is historically false and unsustainable. I'm glad Douthat mentions that important piece of information.

The article is a good read to understand today's culture.
Posted by Living the Biblios at 7:03 AM No comments:

So Planned Parenthood gave an honorary doctorate to the President of Operation Rescue, Troy Newman.

Oops, got that a little wrong. Notre Dame--the most prestigious Catholic university in America--gave President Barack Obama--the most radical political proponent of abortion rights--an honorary doctorate and let him speak before their graduates.

Notre Dame's stubborn insistence on inviting a president who deeply opposes core Catholic values at least shows the charity and tolerance of the institution, something we'd never see from those on the other side of the abortion debate.

What struck me most about Obama's pleasant and persuasive rhetoric was his ability to acknowledge how "the two sides were irreconcilable," yet make the debate sound like a choice between paint color on the wall--we both have reasonable opinions, we just disagree, so let's quit demonizing one another and be fair minded.

So if I say abortion is the taking of a human life and those who perform it are killing children, is that demonizing and uncivil speech? Is that not a fair minded description of this tragic procedure?

Then Obama urged, "Let's work together to reduce the number of women seeking abortions by reducing unintended pregnancies, and making adoption more available, and providing care and support for women who do carry their child to term."

Surely, Notre Dame realizes that this suggestion bumps against the Catholic Church's teaching against any form of artificial birth control. And when it comes to making adoption more available and providing support for women who do carry their child to term, I think the Church is doing far more than the Planned Parenthoods of the world.

If anything, Obama's address at Notre Dame brought attention to the plight of the unborn. Remember Psalm 139.
Posted by Living the Biblios at 8:20 AM No comments:

I secretly liked the jingle in the original commercial. Now, I like the song even more!

You decide if I'm being sincere or sarcastic.
Posted by Living the Biblios at 10:17 PM No comments:

As a resident of Kansas, I've come to enjoy our big skies and the marvelous view of the stars at night. Seeing streaking stars with the naked eye is a joy, but far more amazing is viewing the incredible images of the Hubble Telescope.

For 19 years, Hubble has ushered us into the golden age of astronomy. Now, it's about to get a huge overhaul so it can remain in service for another five years--or about 8000,000,000 miles. Today NASA is sending up a crew to perform Hubble maintenance.

The Telegraph says this will be NASA's most dangerous mission:

Among the greatest hazards facing Atlantis is the intense amount of space junk - such as broken satellites and dead rockets - that is cluttering the area where the shuttle will rendezvous with Hubble...

Astronaut John Grunsfeld likens the intricacy of the tasks he and his colleagues will perform to 'performing brain surgery in space.'

They will face major hurdles, such as unscrewing dozens of minute screws while wearing gloves five layers thick and removing razor-sharp circuit boards capable of piercing the $10 million spacesuits that keep them alive in the vacuum of space.

'I would consider this the climbing Mount Everest of spacewalking missions,' said Mr Grunsfeld, 51.

'In training it’s been going very well…the only hesitation I have is that Hubble has a way of surprising us.'

What surprises me is that this story isn't getting a whole of press. But if something goes wrong...

Pray for the mission's success!

Posted by Living the Biblios at 9:57 PM No comments: