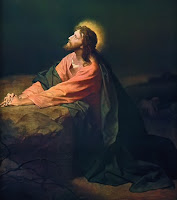 It confronts you and scares you--those times when you have to do something hard.

At school, that test was staring you in the face.  At work, that difficult conversation was now unavoidable. At home, that crisis demanded immediate attention.

In the middle of hard situations, have you ever been like me and said to yourself, “I can’t take this anymore. I want to run. How can I escape?” And then, I fantasize all the possibilities.

We ponder: “I can pack up, get in the car, and leave. Then I’ll have my freedom.” We brainstorm: “I’ll put two and two together and that equals a fifth—of whiskey, that is. Let me feel good now and I’ll handle it better later.” We daydream: “If I avoid it today, it’ll disappear tomorrow.”

When hard situations confront us, we get scared, we get frustrated, we procrastinate. We desperately want to get out from under the weight of it all.

But what if, in the hard situations you face, what if God’s will for you is not that you run from the pressure, but walk through it?


He knew the hour of his death was drawing near. His stress level was at a breaking point. He prayed to God, “Father, take this cup away from me.” And in his anguish, he sweat blood—a physiological condition known as hemohidrosis. Meanwhile, he has no support from his friends. They’re all asleep.

On top of all that, there’s something else contributing to Jesus’ agony—the place where he is at.

Jesus is just outside the city limits of Jerusalem, up on the Mount of Olives, at a place called the Garden of Gethsemane. The word, “Gethsemane,” comes from two Hebrew words, gat, which means “press,” and shemen, meaning, “oil.” Gat-shemen. Gethsemane. Oil press. Surrounded by a garden full of olive trees, all around Jesus is fruit that is destined to be crushed.

At this place, Gethsemane… 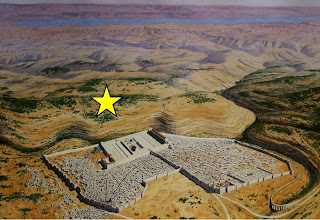 When Jesus looked west, he saw the hard choice—the path of suffering and death.

West from the Mount of Olives and the Garden, across the Kidron Valley, there stands the grand, majestic Temple.  At the Temple, thousands of animals were slaughtered, their blood staining the altar, as worshipers followed God’s Law in order to seek forgiveness. James Martin observes, “But this animal blood had no power on its own—it was merely a placeholder awaiting the day when God’s Son would shed his blood as the final and ultimate sacrifice for sin.”

You know what Jesus will choose. He will go to Jerusalem. He will go to the cross. He will be what John the Baptist declared: “The lamb who takes away the sin of the world” (John 1:29).

But Jesus could have picked an alternate path. He truly had available another choice. It was the easier road. The road well worn. The path of self-protection.

East of Jesus, in just a forty-five minute walk, laid the Judean Wilderness. It is, simply put, the way of escape.


The Judean Wilderness is a desolate and uninhabited region. It’s filled with plateaus, rounded hills, deep canyons, and dramatic cliffs. Throughout the Bible's history, the Judean Wilderness has been a place where people go to escape. It is there that:


In the Garden of Gethsemane, when the pressure was on, Jesus felt what we often feel—the urge to run and escape.

Jesus could have fled, but instead, he bled

In his hard situation, he did not run away, but walked through it. It was not easy, but he was committed to doing God’s will. For our sake, he chose to serve.

What hard situation do you face?

Maybe it’s a relationship that’s been strained for a long time. Up until now, everyone’s been too stubborn to take that first step of reconciliation.  By God’s grace, you’ll take that hard first step.

Maybe you’ve got an addiction. For too long, you’ve been denying it, protecting it, and feeding it. And it’s slowly stealing away your life. Now’s the time to do the hard thing. By God’s grace, you’re going to admit your need and get help.

Or maybe the hard thing you must do is learn the habit of reading the Bible. You hate to read. You’d rather watch TV or movies. But your avoidance of God’s Word is keeping you a spiritual infant. It’s time to take that hard step of learning to feed yourself on God’s truth. By God’s grace, you’re going to spiritually grow up.

Imagine what would happen if everyone committed themselves to walking with God as they chose to face up and do what’s hard. We will experience what Hebrews 5:8 says of Jesus: “He learned obedience through what he suffered.”

One day, the Bible tells us these tombs, and the graves of all people throughout the world, will be opened up. The dead shall be raised. Sin, evil, and death shall be judged and finally be defeated forever. God’s everlasting kingdom on earth will be established (Daniel 12:2; John 5:28-29).

Why will all this happen? Because in the Garden, Jesus made a choice. He chose the hard road. He made the difficult decision. For our sake, he chose to serve. He could have fled, but instead he bled. And on Easter, the third day, God raised him up victorious.
Posted by Living the Biblios at 12:13 AM 1 comment:


It’s Friday night and I’m sitting at home. I wanted to take my family of five to the Hutchinson Community Theater to see their performance of Sherlock Holmes, but I can’t because my bi-weekly paycheck is missing $60. Let’s do a little detective work and solve the mystery of the missing money.

Actually, this case of whodunit is easy to solve. First, Congress created a fiscal “lions, tigers, and bears” façade that threatened ominous ruin of the economy. Then, you—a Republican—went along with Democrats at the start of the year and voted in favor of President Obama’s Fiscal Cliff Package (H.R. 8), which didn’t just raise taxes on the “rich,” but burdened every working stiff with an expired-and-reinstated 2% social security tax increase. Finally, you assured constituents (Kansas Common Sense Newsletter, January 7) that while you still don’t like higher taxes, it was necessary to maintain some semblance of the status quo, except now life is more difficult for me and thousands of Kansans.

Because you wouldn’t fight on conservative principle, and instead acquiesced to getting along with well-dressed colleagues on the other side of the aisle, I’ll be making about $1,500-$1,600 less this year than last.

Senator Moran, let there be no mystery about how I feel—I’m furious, angry, and disgusted. Please, no more empty words. Cast votes that reflect conservative values. Or, get out of the Senate.
Posted by Living the Biblios at 11:26 PM No comments: