If you grew up with brothers and sisters, you probably experienced a few tense moments of sibling rivalry. As the older brother of two sisters, I can remember incidents of fighting, but the reasons why are long forgotten. Fortunately, today I have a great relationship with both of my younger sisters.

The Bible is filled with stories of sibling rivalry--Joseph and his brothers, Jacob and Esau--but one pair of siblings rarely discussed is Simon Peter and his brother Andrew. While reading John 1:35-42, I was struck how Andrew met Jesus first, before his brother Peter, yet it's Peter, not Andrew, who becomes the star disciple in the gospels. In fact, the Anchor Yale Bible Dictionary states bluntly, "The New Testament shows little interest in Andrew." So, was there a sibling rivalry between Andrew and Peter?

We know the disciples were prone to jealousy and envy (Matthew 20:20-28; Mark 9:33-37), yet it appears that Andrew and Peter enjoyed a harmonious relationship. After Andrew encountered Jesus, John 1:41-42 tells us, "the first thing Andrew did was to find his brother Simon and tell him, 'We have found the Messiah' (that is, the Christ). And he brought him to Jesus." Notice that when Andrew had become convinced of Jesus' special nature (John 1:39), the first person Andrew wanted to tell was his brother Peter. That's brotherly love!

If you're familiar with the New Testament, you know that Peter goes on to have a prominent role in relationship to Jesus. While Andrew and Peter were both among Jesus' 12 disciples (Mark 3:16-19), Jesus did not give Andrew and Peter equal attention. Peter, along with James and John, received extra time and training (Mark 5:37; 9:2; 14:33). Interestingly, there is one incident in Mark 13:3--when Jesus discusses the end times--where Andrew seems to be butting in as he listens to Jesus along with Peter, James, and John. The last time we see Andrew's name in the Bible is in Acts 1:13. There, Andrew, Peter, and many other disciples are a unified fellowship of believers awaiting the arrival of the Holy Spirit.

Unlike the story of Jacob and Esau, the Bible doesn't tell us whether Peter or Andrew was the older brother. If I were to guess, Peter's bold personality and strong leadership style suggests someone first born. If true, then the younger brother introduced the older brother to Jesus. Peter learns from Jesus in the gospels, preaches Jesus in Acts, and writes of Jesus in 1 and 2 Peter. But in contrast to Peter's major role, Andrew is relegated to a minor character (John 6:8-9). Was Andrew envious of his older brother? Who knows? Maybe Andrew, who spent time with John the Baptist (John 1:40), took to heart one of the Baptist's lessons: "He must become greater; I must become less" (John 3:30).
Posted by Living the Biblios at 11:15 AM 1 comment: 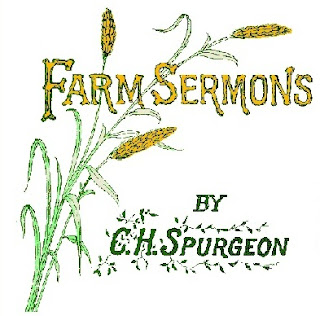 The Kansas wheat harvest is coming early this year. Typically, harvest doesn't begin until the middle of June, but this time around, it looks like harvest will be in full swing before Memorial Weekend. Long time farmers who I've spoken with tell me this early harvest is highly unusual. In their lifetime, they can remember only one other early harvest.

Meantime, believers in Jesus are waiting for the Lord's harvest time, when He will bring to completion the end of the world as we know it. God, just so you know, it's OK with me if you want to start your harvest early!

Until then, you might enjoy this series of biblical messages, preached by the great 19th century English pastor Charles H. Spurgeon, entitled "Farm Sermons." Originally collected into book form many years ago, Spurgeon declares, "It is fit[ting] that farmers should have sermons gathered out of their own occupation, for it is one which, above all others, abounds in holy teaching." This collection has a total of 19 messages. Check one out this harvest season. Surely, it will bear some good fruit in your soul!
Posted by Living the Biblios at 11:32 AM No comments: