We live by seasons.

I have an additional season in my life. Each July, I see one of my favorite musicians, Michael Roe.

It started in the early 80's with trips to Cornerstone. When I moved to Kansas, I managed to bring Mike and his guitar to Little River for a couple of shows.

This year, he's touring with The Lost Dogs, a group of musical all-stars that deliver a versatile blend of country, roots, rock, and singer-songwriter tunes. On stage, they're personal, funny, laid-back, prophetic, charming, and stirring. Their new release is entitled, "Old Angel."

Check out a sample of their music with the video above.
Posted by Living the Biblios at 11:30 PM No comments: 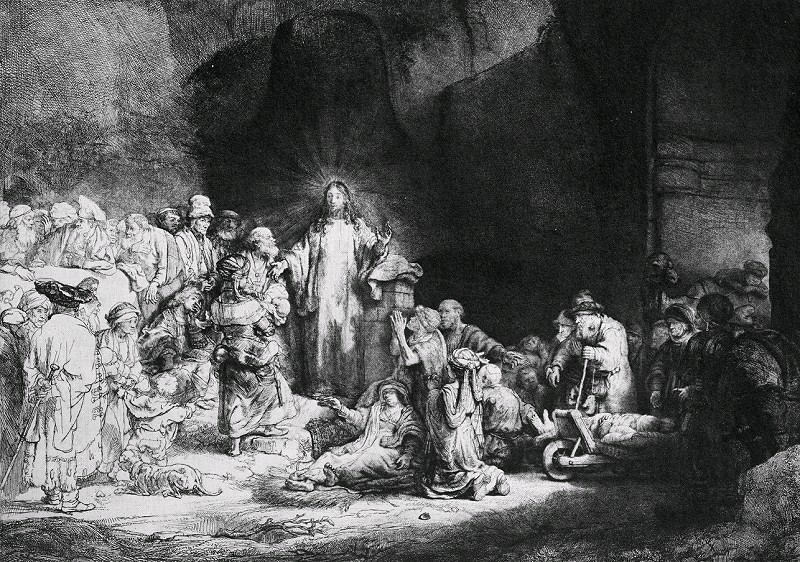 Biblical art has been a growing interest of mine as I've sought to visually illustrate the Bible for my college classes at Sterling College and sermons at the Congregational Church.

Rembrandt's etching, "The Hundred Guilder Print," is of particular interest. Not only does the print beautifully portray the ministry of Jesus, the story behind the etching's title has the potential of illustrating a key a Christian doctrine--redemption.

According to the Pocket Dictionary of Theological Terms, redemption expresses the theological idea that "sinful humans are 'bought back' from the bondage of sin into relationship with God through grace by the 'payment' of Jesus’ death." Redemption is one of the metaphors used by the Bible to explain God's work of salvation.

According to two websites, art scholar Christopher White traced the title's origin, "to a print seller named Mariette, who sold an impression of this print to Rembrandt himself for 100 guilders." If true, the story would be a terrific illustration of redemption. As Rembrandt bought back at great price his very own print, so Jesus at the cross paid a high price to buy back his own (Mark 10:45; 1 Corinthians 7:23).

To verify the story, I went to the library and looked up Christopher White's Rembrandt as an Etcher (Yale University Press, 2nd ed., 1999). In chapter three, White states:

The apotheosis of Rembrandt's activity in etching in the 1640's, and according to popular opinion of his whole career, is the large etching known as The Hundred Guilder Print. The origin of the title can be traced back to the story that the artist himself bought back an impression of the print for one hundred guilders.

Much to my surprise, this is all White says about the origin of the print's title. No mention is made about Rembrandt buying back his print from a dealer named Mariette. Nothing is said about where this story originated. However, White footnotes his last sentence. In the book's back, footnote #56 from chapter three, it says this about the etching's famous name:

De Geest's account of high prices which Dutch collectors were willing to pay for Rembrandt's work during these years is confirmed by Zacharias Conrad von Uffenbach, a German traveler, who was Holland in 1711. Uffenbach makes the earliest exant reference to Rembrandt's etching of Christ with the Sick Around Him, Receiving Little Children, as The Hundred Guilder Print in his Merkwurdige Reisen durch Niedersachsen, Holland und Engelland; he writes that he visited the cabinet of David Bremer of Amsterdam on March 1, 1711 in order to see his prints:

"He has a considerable number and among the most outstanding a great number of Rembrandts; surely he had the best, but not the so-called Hundred Guilder Print, which is called thus because it once brought that high price at an auction. It represents the miracle of Christ where he heals a blind and deaf man..."

Notice that von Uffenbach states that the print in question was sold at an auction, but he doesn't identify who it was that paid the high price.

Then in footnote #1 at the bottom of page 167, Slive reports on further work he did to find out just how The Hundred Guilder Print received it's famous name. Here's what he says about his fact-finding mission:

The author has been unable to learn which collector or dealer paid 100 guilders for the etching of Christ with the Sick Around Him and at what sale this bid was made.

So did Rembrandt actually pay the exorbitant price of one hundred guilders to buy back his own print of Jesus?

Unfortunately, I don't think the claim can be made with certainty. While Rembrandt was an avid art collector, it seems this particular story is more legend than fact.

I wish Christopher White said more about how the story was "traced back" to Rembrandt. In the meantime, it appears that the research of Seymour Slive is closer to the actual truth.

And those facts, ironically, are a mystery.
Posted by Living the Biblios at 2:37 PM No comments:

To equip Bible students to dig deeply into God's Word, Logos Bible Software recently released an innovative DVD series entitled, "Learn to Use Biblical Greek and Hebrew." Co-author Dr. Michael Heiser contends, "You are smarter than a lexicon." In other words, by knowing the steps to doing good word studies, Heiser believes you can achieve results that are as good or better than entries in a Greek or Hebrew dictionary. Apparently, lots of people are buying into Heiser's argument because this DVD set is the best selling pre-publication product in Logos' history.

So when the discs arrived in the mail, I applied the first several lessons to a word in Genesis 26:8, where it says, "When [Issac] had been there a long time, Abimelech king of the Philistines looked out of a window and saw Isaac laughing with Rebekah his wife." The translation note said that, "The Hebrew may suggest an intimate relationship." I wanted to know why, so I followed the steps given in the DVD. Below are my results. Interesting discoveries were made along the way! Bottom line, there's good justification for the translator's note.

1. Basic meaning, “to laugh.” Do we get any clue as to what kind of humor?

3. In the story of Abraham and Sarah, where this word occurs 5 times, the laughter is one of disbelief. Because the possibility of having a child so late in life was beyond hope or expectation—especially after a lifetime of no success, the laughter revealed the comedy of the absurd.

4. Age 9 daughter driving backwards for the entire race on Mario Cart Wii illustrates the comedy of absurdity. It’s not something one normally sees or expects.

5. In Genesis 19:14, the narrator uses this word to describe the response of Lot’s family to the angel’s warning to flea the city. The thought that an entire city will be destroyed seemed absurd, that is, beyond imagination.

6. In Genesis 21:6, there’s a wordplay—Sarah testifies, “God has made LAUGHTER for me; everyone who hears will LAUGH over me.” Now, the absurd impossibility of having a child late in life has incredibly come to pass. The humor of what could never happen is now the humor of what actually occurred.

7. In Genesis 21:9, the narrator reports what appears is the laughter of mockery—that such a big deal is being made out of the fact that Isaac has stopped nursing. Who is one teasing? Is it the mother Hagar, or is it the boy Ishmael?

8. “Laughing” in Genesis 26:8—and the suggestion of interpreters that this word is suggesting an intimate relationship—is the reason for this word study. What exactly does this word mean here?
A. Was it considered culturally inappropriate for a man and woman to laugh in public? Was that considered flirting?
B. Wordplay—Isaac means “laughter.” Maybe we could translate, “...saw laughter laughing with Rebekah his wife.”
C. Context of Genesis 26:8
1. vs. 7 Rebekah is “attractive in appearance.”
2. Early on in Egypt, Isaac was concerned that is true relationship to Rebekah would be discovered. But much later (vs. 8a), in this incident, Isaac was not being careful in his public behavior toward Rebekah.
3. Imagine that you are married to your wife, but circumstances won’t allow you to have intimate relations with her—that’s frustrating!
4. After World War II, many couples kept their marriage a secret because a spouse was under 18 or didn’t want family to know.
5. Whatever behavior Isaac was exhibiting toward Rebekah, Abimelech interpreted this behavior as something that husbands and wives do (vs. 9).
6. Text of 26:8 says, “Isaac laughing with Rebekah” and not “Isaac and Rebekah laughing.” The focus is on Isaac’s behavior. Would this not be untypical in a male focused society?
D. Grammar of Genesis 26:8 (this section was authored by Vincent Setterholm in the Logos forums section) “...there is an important grammatical clue as well. In Hebrew (and English and I’d imagine most if not all human languages) some verbs generally take a direct object (e.g. I hit the ball) and some generally do not (e.g. ‘He died’, or ‘I slept’) and some verbs can occur with or without a direct object (sometimes with a change in meaning depending on which state you find them in). Verbs with a direct object we call ‘transitive’ and verbs without a direct object we call ‘intransitive’. Some verbs that are intransitive in English might be transitive in their closest Hebrew equivalent, so you can’t always reason just from the standpoint of English grammar, but in the case of ‘laugh’ and צחק, these verbs are generally intransitive. We can laugh ‘with’, ‘at’, or ‘near’ someone (that is, this verb regularly occurs with various prepositional phrases) but we don’t generally ‘laugh someone’ or ‘laugh something’. In the case of Genesis 26:8, צחק takes a direct object (Rebekah). That’s unusual and a pretty good grammatical indication that something euphemistic is going on.”
E. Tentative conclusion—context of 26:8 suggests that when Abemilech saw how Issac was acting toward Rebekah, he viewed it as behavior typical between husband and wife. Most likely, Isaac was engaging in flirtatious foreplay with Rebekah. Literal translation: “Abemilech saw laughter laughing Rebekah his wife.”

9. Genesis 39:14 and Genesis 39:17—the story where Joseph flees from the advances of Potiphar’s lying wife—provides strong evidence that SAHAQ has a sexual component in its range of meaning.
A. Genesis 39:14 there’s a parallel between “laugh” and “lie.” The NIV offers a good translation, “to make sport of us!” implying that Joseph was there for the challenge of sexual conquest.
B. At vs. 17, the verb “came” is followed by purpose statement—“came in to me to laugh at me”

10. In Exodus 32:6, SAHAQ is translated “to play” by ESV and “indulge in revelry” by NIV.
A. Their evil behavior was all encompassing, for the idolatrous Israelites “sat down” to eat and drink and then “rose up” to SAHAQ.
B. The general nature of laughter is festive and light-hearted.
C. Whether the word here has sexual connotations is possible, but not entirely clear. In ANE, idolatrous worship was often linked with sexual immorality.

11. In Judges 16:25, the captured and humiliated Samson is summoned before the lords of the Philistines, “that he may entertain us” and so Samson “SAHAQ them.”
A. The first “entertainment” word is different than the second “entertainment” word
B. Just how did Samson “entertain” them? Context doesn’t give us many clues. But in the other places where SAHAQ appears, there are sexual connotations.

13. Initial Conclusions—SAHAQ, “to laugh”
A. Humor of absurdity. The response by Abraham and Sarah in Genesis 17-21 to God’s promise of bearing a child late in life. The promise seemed so ridiculous, so improbable, so absurd, it brought about the laughter of doubt and unbelief.
B. Euphemism for engaging in sexual behavior. SAHAQ is one of the words Potifar’s wife uses in accusing Joseph of sexual impropriety in Genesis 39.
Posted by Living the Biblios at 7:27 AM No comments: