A Lesson for the Media 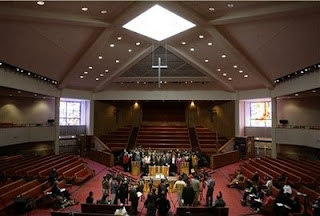 Here's a lesson, given by Rev. Jeremiah Wright, Jr. and the UCC national office, that the media will understand:

April 3:
Trinity United Church of Christ tells the media "no more" at the "Sacred Conversations" press conference and establishes rules for any reporters inside the sanctuary.

April 12:
UCC.org has a link to The New Yorker article prominently featured on its home page.

April 12:
Rev. Jeremiah Wright, in his first public sermon since the firestorm over his remarks began, fiercely criticized the media in a funeral message:

Reflecting on the late [appellate judge R. Eugene] Pincham, Wright said his faith “was not the jingoistic, chauvinistic ‘you’re either with us or against us’ demonizing kind of faith.” Wright said Pincham was friends with “Jews, Muslims, rabbis, imams, fathers in the Catholic church and [Louis] Farrakhan in the Islamic faith.”

Escalating into full-preaching mode, Wright thundered, “Fox News can’t understand that. [Bill] O’Reilly will never get that. Sean Hannity’s stupid fantasy will keep him forever stuck on stupid when it comes to comprehending how you can love a brother who does not believe what you believe. [Pincham’s] faith was a faith in a God who loved the whole world not just one country or one creed.”

At that point, congregants nearly drowned Wright out with a booming standing ovation.

So much for encouraging the media to take its spotlight somewhere else.

Posted by Living the Biblios at 9:01 AM