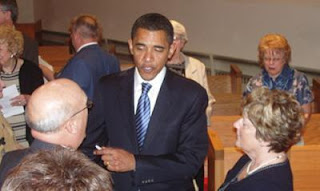 About 200 people gathered in the 426 N. Eighth St. church's sanctuary afterward to catch a glimpse of the Democratic presidential hopeful... For almost an hour, Obama shook hands, posed for pictures and signed autographs at the front of the sanctuary for everyone who patiently waited to greet him.

Since everything a politician does is carefully scripted, we'll do our part here as media hacks to over analyze Obama's steps.

A member of the Penn Central conference, St. Mark's is one of six UCC churches in Lebanon. Two UCC churches in Lebanon were "Five for Five" churches in 2006, but St. Mark's wasn't one of them. "Five for Five" churches are those who give to all of the UCC's one time yearly offerings. While the UCC Coalition doesn't list them, UCC.org's "Find a Church" reports that St. Mark's is an ONA church, or open and affirming, meaning that the church welcomes into their full life and ministry persons of all sexual orientations and gender identities. As we reported earlier, Pennsylvania is thick with UCC churches, so Obama inevitably had to pass over several possibilities. St. Mark's doesn't have a website, so here's guessing that Obama's campaign sought the advice of Penn Central Conference Minister, Rev. Dr. Marja Coons-Torn.

In all likelihood, Obama's appearance was designed to garner some "Obama At Church" photos and headlines to hopefully take the sting out of his "bitter" comment, when he privately told a San Francisco fund raiser audience that rural people cling to guns and religion. Lebanon County has one third class city and is 54% farm land, so Obama decided to go into the bitter heartland.

Pennsylvania's primary vote is Tuesday. Obama and Hillary Clinton are neck and neck in the polls.

Was this the first time that Obama stepped foot inside any church or a UCC church since the Jeremiah Wright controversy broke out?
Posted by Living the Biblios at 8:02 AM